cockney steve liked this
Autocorrect is so frustrating. It's always making me say things I didn't Nintendo.

Maxthelion wrote:I spoke to Maciej on the Polish team last night - he mentioned he had only 15 hours on the Genpro and that this wasn't really enough to do it justice. He said he would be scoring better in the Extra 200 he normally flies. This says a lot about the benefit of stick time.

I agree. I think that aerobatic flying, perhaps more than any other form of flying, demands an intimate relationship between pilot and machine. Stick time matters. I think that you need a lot of time in an aerobatic machine to have all the "nuance" at your displosal. How does it perform when you push, or pull, off a vertical line at below stall speed? What happens if you abuse it during a flick?

I should have posted this before, but if anyone is interested you can get all of the detailed results here: https://civa-results.com/2019/WIAC_2019/indexpage.htm

Today was the last day of the competition, we finished the final programme, Free Unknown Programme 4, and so we have a new world champion, Igor Chemov of the Ukraine.

Sadly, it was a not a great day for the British team. I think that most of us were a little disappointed with our flights today. Everyone except Adrian picked the same Free Unknown sequence. It was an interesting challenge with two tricky bits.

It started with a 1/4 turn spin. Starting with a spin is tricky in terms of positioning and so poses a puzzle. To signal to the judges that you are starting your competition sequence you are required to perform three wing-wags. As you might expect, there are rules that govern the wing-wags. At least 45 degrees, and scoring commences once you hit horizontal flight after the last wing-rock.

Aerobatic competition is really a performance. We are trying to impress the judges with our flying, As I have described, there are complex rules about how to score an aerobatic figure, but the bottom line is that this is a subjective sport, rather like figure skating or diving. The judges are human beings and so, inevitably, swayed by subjective impressions.

So, if you hope to score well, you want the judges to sit-up and pay attention and think "This pilot means business" as you enter the box. You want your wing-rocks to be slightly aggressive, but certainly definitive. I, and most more experienced competitors, generally prefer to rock wings aggressively to 90 degrees per rock. That gets the judges attention!

If you want to spin though you MUST be slow, ready to stall. You can't aggressively rock your wings if you are at stall speed. During our training camp, in Morovska Trebova, we had practiced an unknown sequence that started with a spin. We had come up with an interesting entry to the spin which limited the number of variables, but was essentially an aerobatic maneuver in its own right. We would dive at 45 degrees, perform two wing rocks (90 degrees to knife-edge and back), pull to vertical perform a 3rd rock, 90 degree and back, and then push off at height with minimal speed and pretty much straight into a spin. We discussed this and this was the plan that most of us adopted.

My plan was to begin my 1 1/4 turn spin directly over the centre of the box.

This worked pretty well for most of us who flew it. In my case it placed my spin precisely where I intended it to be.

This first figure was a 1 1/4 turn spin, ending in a vertical dive, into a "P loop" pulling round to inverted, horizontal flight. These are common figures at this level and above, but they are tricky because of the sustained "G" that you pull.

"G" is an inevitable and essential aspect of aerobatic flight. Even turning a tight corner in an aeroplane will expose you to higher "G" than is normal for ground-base humans.

Aerobatic pilots take this to extremes. "G" happens when you change direction. If I pull on my elevator the aeroplane will describe an arc of some kind but my body will try and keep going in the direction that it was travelling. So the aeroplane will push on my body, applying "G".


The human body's ability to cope with high "G" is actually quite astounding. Wikipedia says that the highest "G" that a human has survived was in a NASCAR accident and was 214G!!!!!

G is weird though, it is not just about the acceleration, but also the duration. Aerobatic pilots at higher levels of competition routinely exceed the "G" pulled by Fighter pilots, but they do it for shorter periods of time. This is important because human physiology is sophisticated and has a series of "valves" built-in. So I can, and do, regularly pull 8, sometimes 9G. My aeroplane is stressed to +10/-10G. Mostly though higher G numbers only last for a handful of seconds or even less. During this short period of time the "valves" in my head keep my brain oxygenated. So most of the time, I don't need to worry about blacking-out because of high-G.

A "P loop" though lasts for longer than a handful of seconds. I am diving at high speed (I want lots of energy when I exit the loop so that I can roll nicely, so I need to pull quite hard) but I need to get around 3/4 of a loop at this high speed. So I am exposed to high-G for a longer time, 10 seconds or more. The valve only works for a couple of seconds and so blood will be draining from my head during this figure.

I can perform ant-G straining maneuvers to help, but it is easy to forget in the heat of battle. Trevor flew the spin entry that I described, dynamic, impressive and somewhat aggressive. He placed the spin perfectly and nailed the vertical down line after 1 1/4 turns. He left the power on and pulled quite aggressively and then blacked-out. This is not quite as dramatic as it sounds. You can loose vision ("black-out") without losing consciousness, but even so this is very disorientating when it happens. Trevor continued to fly beautifully for several more figures, vision returns almost instantly that the G reduces, but unbeknownst to us, was quite disorientated.

He lost heading on a link-figure and ended up breaking-off and as a result zeroed a couple of figures. This was a shame because up to this point Team GB was purring at the quality of his performance.

I was flying almost last today. I am not sure if it was intentional, but the top 3 pilots, me included, were in the last 4 to fly this last sequence of the competition.

I had spent all day at the airfield supporting my team-mates and prepping for my flight. I had tried really hard to avoid discussions about where I, or the team, might place. I was working on trying to fly calmly and so managing my mental state. Aerobatics is a surprisingly intellectual challenge in many ways, and so managing one's mental state is really important. Each pilot approaches this differently. My approach is to try to focus only on my flying.

You may have noticed that I haven't said much here about other competitor's flying. That is because I don't know how they are flying, other than from their results. This is a weird compromise on my part. The aerobatic nerd part of me wants to watch, and critique, every other competitor, especially the good ones. However, the competitor in me doesn't want to know. If I watch "the competition" it puts my head in the wrong place. I can't affect how other people fly. I can't really change how I fly, once I am at the competition. My best hope is to try and fly the way that I do when I practice. So my game, is to try really hard to be relaxed and focussed.

I am sort of proud of myself that I have been able to do that here at the World Championships. I have achieved this goal to a higher degree that I have before, and so I feel as though I have made some real progress in this "mental-game" aspect of competing.

I tend to go off alone and "chill" for some time before I fly. This has worked well for me this week, I have flown in a relaxed but extremely focussed frame of mind. This means though that as soon as I start watching "the competition" I start worrying about the wrong things. So I have tried to discipline myself to avoid watching anyone flying except my team-mates.

When it came time for my final World Championship flight, I was relaxed and focussed. I had learned the sequence, walked it through many, many times. Discussed the flight strategy with my team-mates and watched most of them fly it and asked for their advice. I was ready.

The Czech team had put a tricky figure into the sequence. Inverted start, pull to vertical, another P-loop, 4x8 hesitation roll from inverted at the end of the loop, followed by a full flick-roll in the opposite direction. The team had come to refer to this as the "demon-figure" or sometimes a ruder name. The problem was that you were coming off the top of the downward P-loop, into the hesitation roll and then ****. Would we be fast-enough to flick nicely after the hesitation-roll?

In the event I think that it is fair to say that this proved to be an easier figure to fly than we anticipated, but nevertheless caught several of us out.

I landed after my sequence feeling pretty good. As I taxied back in the team lined-up, along with the Austrian team, and gave me a round of applause and a mini-mexican wave. Team Manager, John Royce, came up to me as soon as I had shut down and praised the flight, but said that the team were a bit worried that they thought that I had flown the 4x8 hesitation roll in the same direction as the spin, rather than opposite to each other as defined in the sequence.

I wasn't sure. I thought that I had rolled to the right and flicked to the left, as I had planned to do. It took a couple of hours for the scores to come through and the team were right, I had made a mistake.

Aerobatics is a challenging game, this one significant mistake was enough to move me, and the team, from second place to sixth in the individual standings and third in the team standings.

In summary I am currently elated at the experience, pleased with my own performance, and at the same time disappointed that we, and I, came so close to doing better.

I will end up with a couple of medals personally, Bronze and Silver, for my individual performance in two of the Programmes. The team has won the Bronze medal.

Afterwards we headed back to the hotel, and found a local bar and had a few beers. We ended the evening by team-GB challenging the judges to a bowling competition in a local bar - we won! 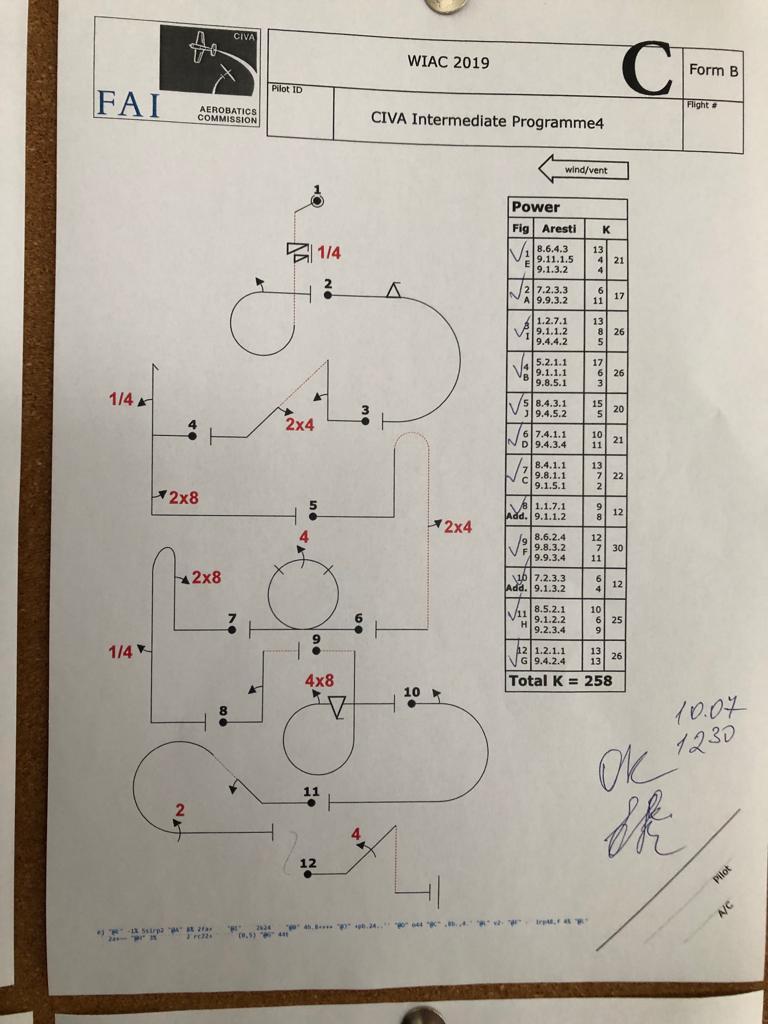 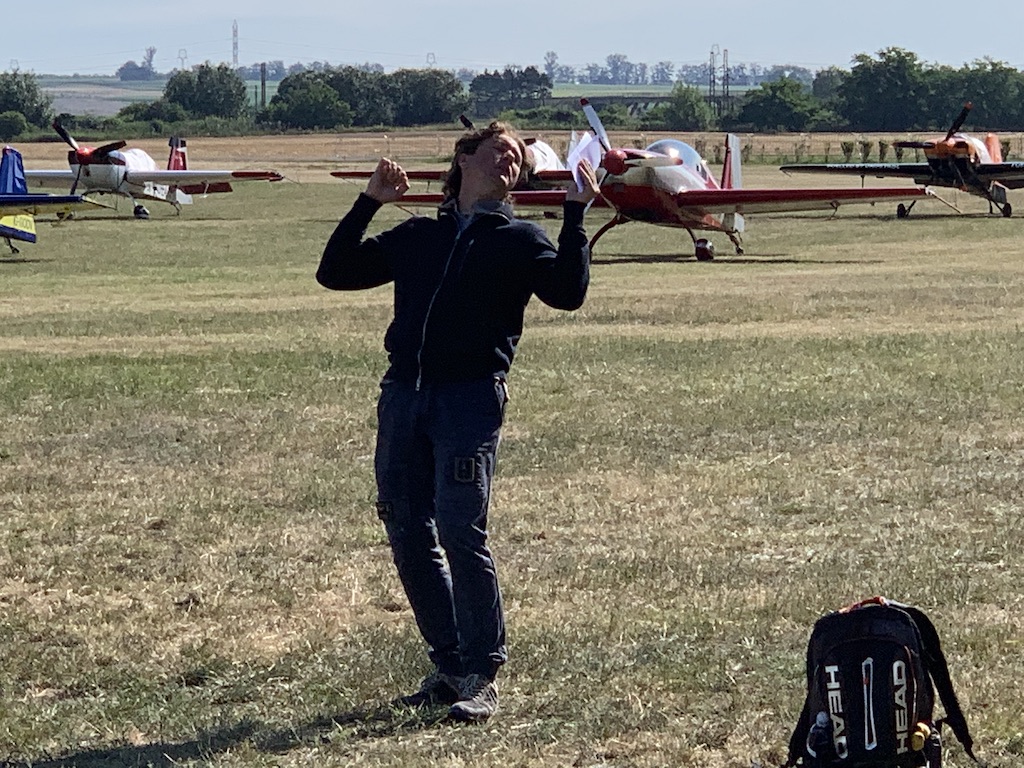 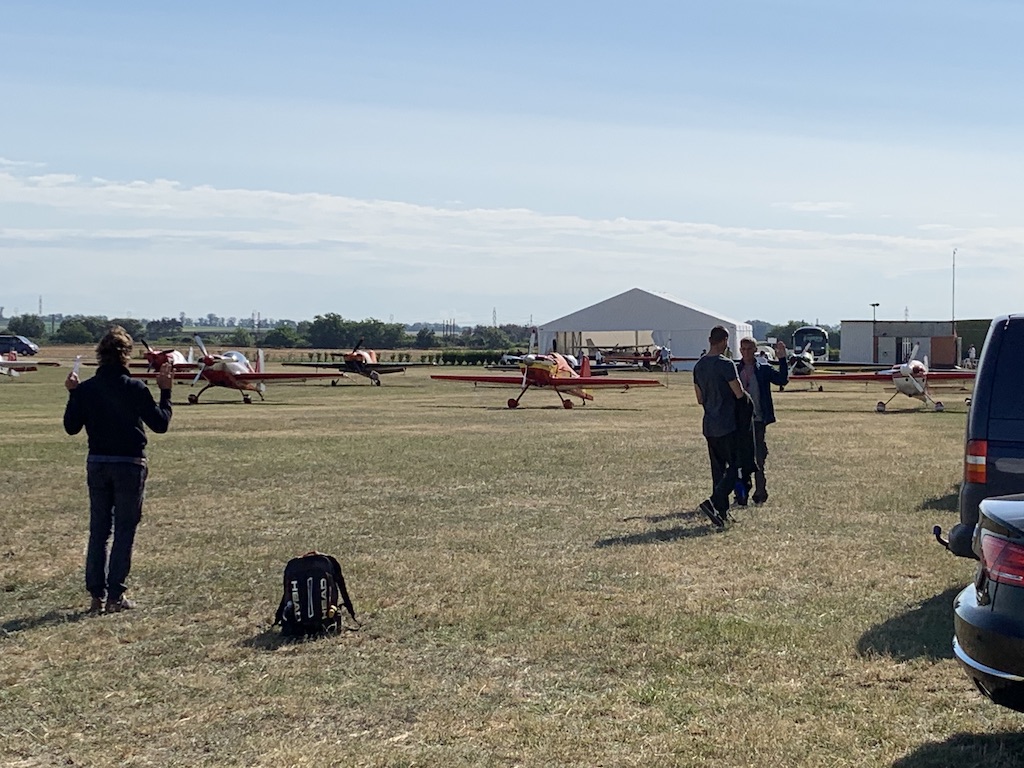 The opposition (Ukraine Team) walking their sequences for Prog 4. 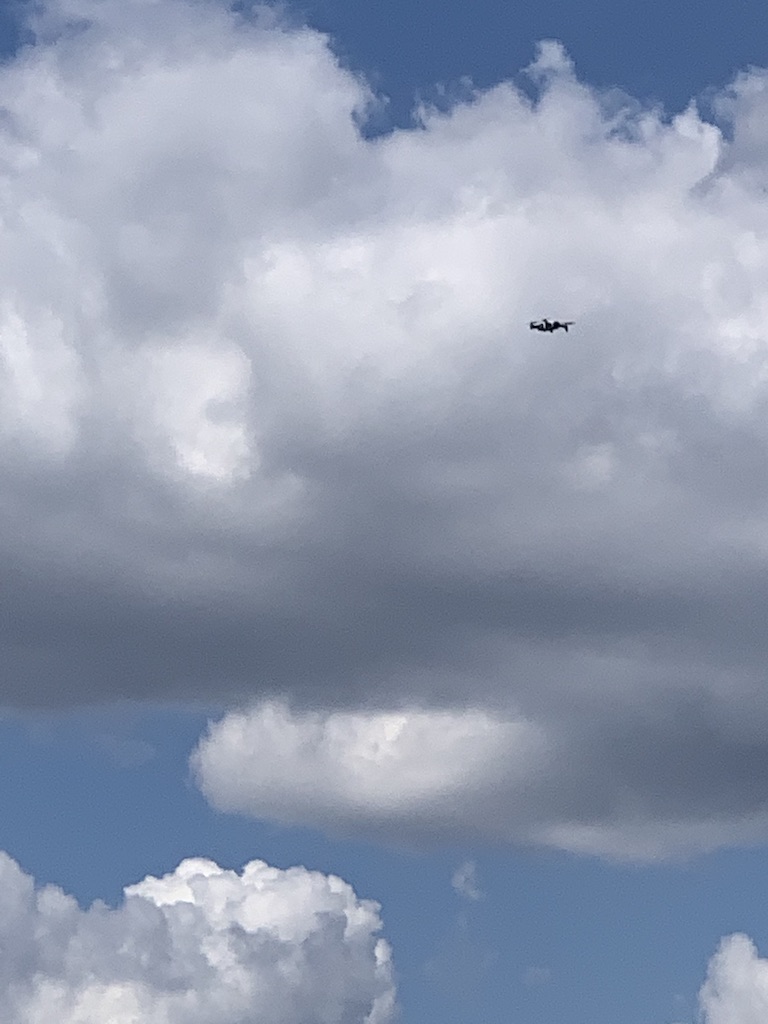 Winds aloft were measured throughout the day by this drone and published automatically on the competition website. 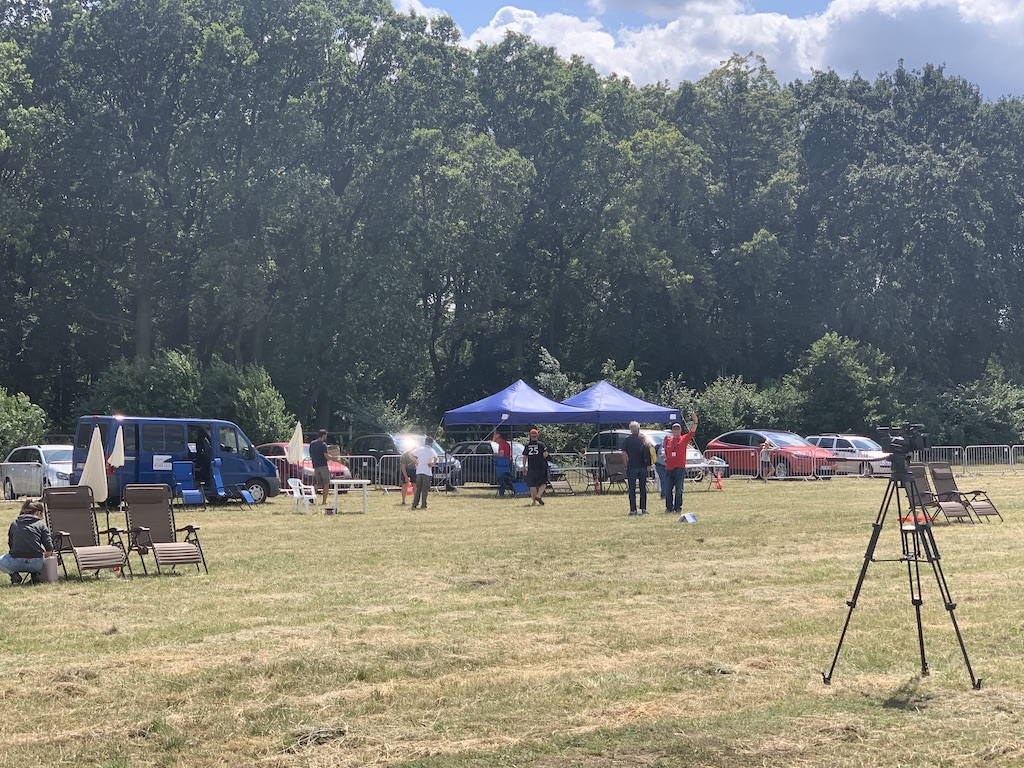 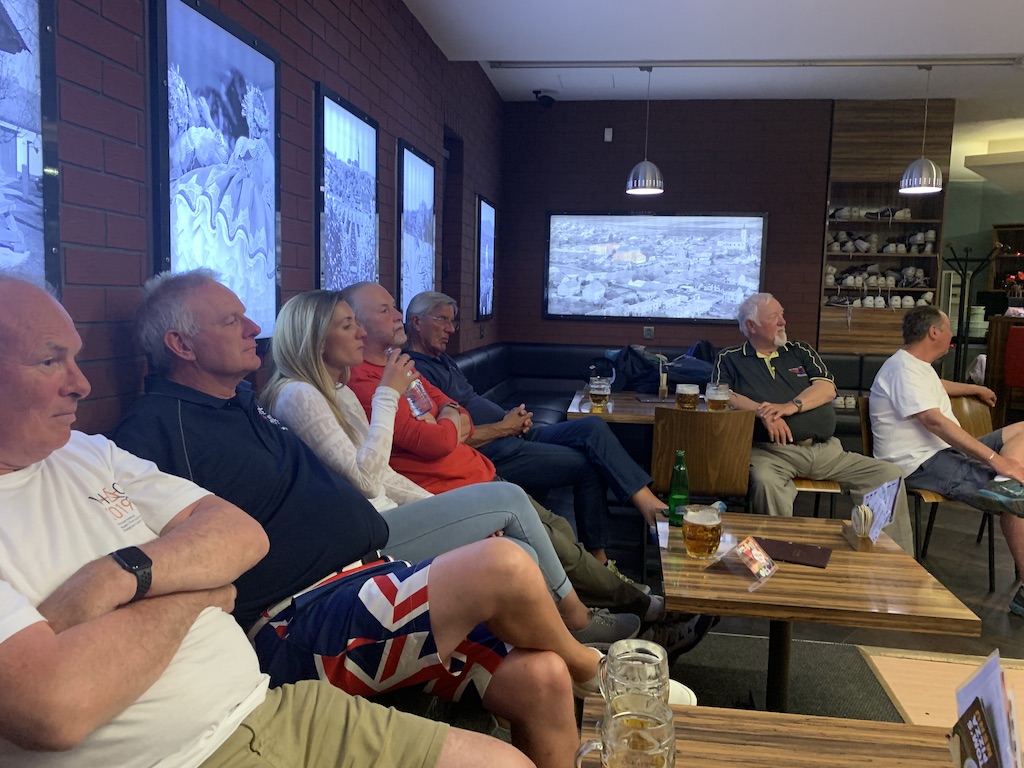 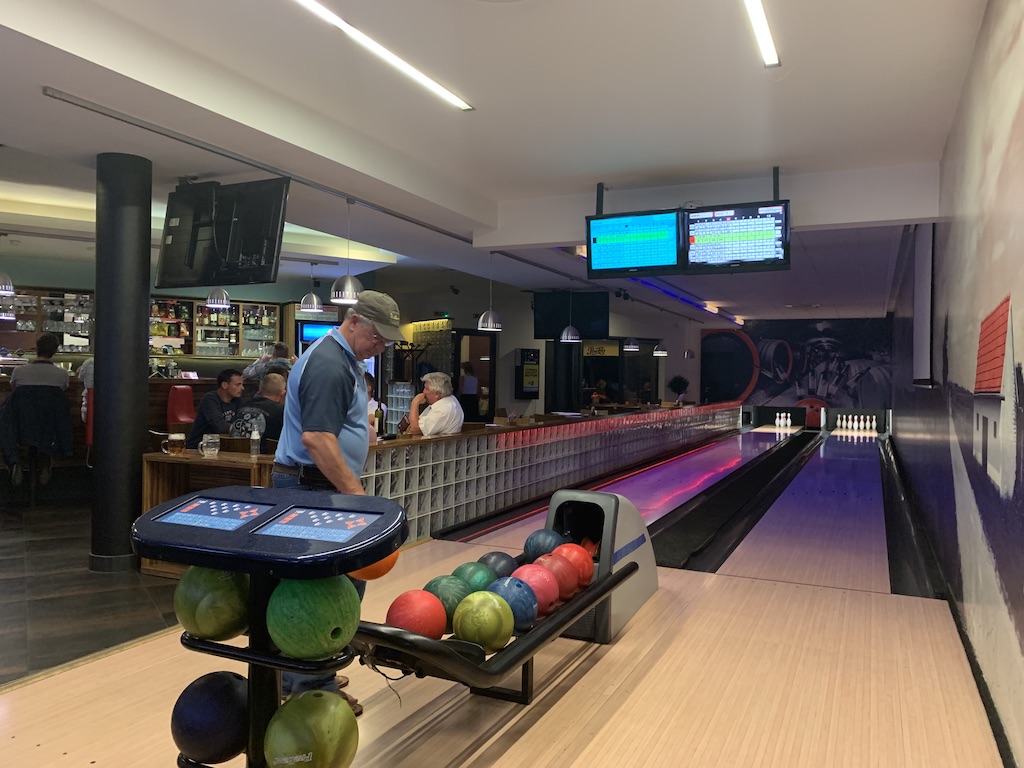 Challenging the judges to bowling. Lots of jokes about aerobatic scores for bowling failures. 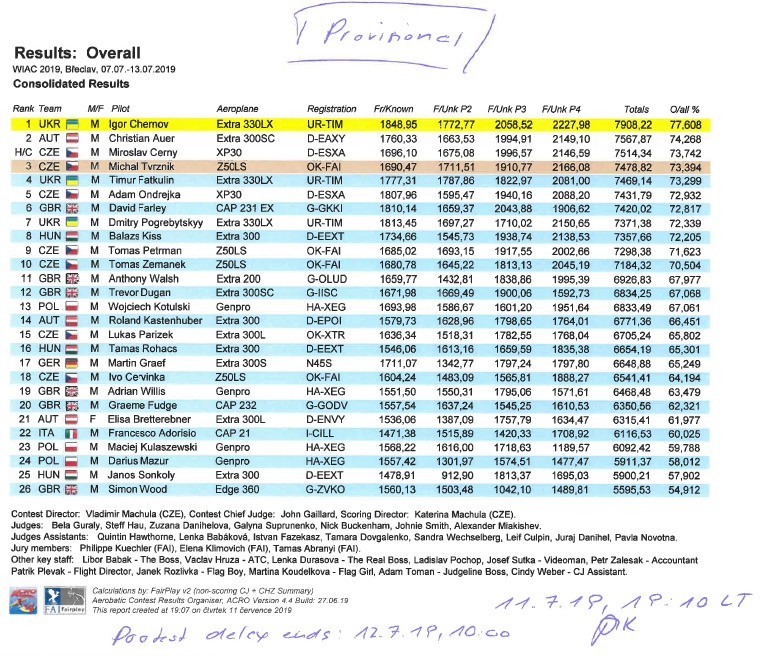 Hooligan, Dave W, Charles Hunt and 10 others liked this

Also for taking the time to write it all up so vividly. Best thread for ages.

davef77 liked this
there are two sorts of people
those that can extrapolate from incomplete data . . .
Mike McP

Peter
davef77 liked this
Pete S as was