A couple of forumites asked if I could keep them informed, so I thought that this might be a nice way to do it. This won't be just a trip report, which is why I haven't posted it there. I hope that is ok?

I was very pleased to be selected to represent GB in this competition as part of a team of 6 pilots. The competition is being held at Breclav in the Czech Republic and starts, officially next Sunday with practice days from Thursday.

However, I am writing this from the Czech Republic now, 4 of us, plus our team Manager, John Royce, and plus one of our coaches, Nick Buckenham, decided that we would make the trip out early and setup a training base at another airfield. (A bit like how the England Football team go to a posh hotel with WAGs for training at the big championships, except our hotel is not that posh and we don't have WAGs with us

That trip itself was a big deal for me. I generally fly for 30 minutes at a time spending quite a lot of that time pointing in some, for most pilots, unusual directions and pulling (or pushing) fair amounts of G. I am much less used to flying for the purposes of travel, other than to get to a competition. I am also, to my shame, not that well practiced at the more procedural aspects of flying, I mostly fly in class G and don't spend a lot of time on the radio. This was my first flight abroad.

I spoke to people, asked questions here (thanks for all the help), read lots of stuff, both general advice and refreshed myself on the regs. I practiced flight-planning with SkyDemon and in the end set off, in company with a friend, and team-mate, from White Waltham on Saturday 29th July for the Czech Republic.

We flew in formation all the way, via Kortrijk in Belgium, Worms in Germany, a lovely little airfield and small-ish town not far from Manheim where we stayed overnight.

The following day, we set off for Movsca Trebova (CZ) via Burg Feurestein (DE). Two great, small and friendly airfields.

The people at Burg Feurestein waived our landing fees because we were on the way to the WIAC and flying interesting aeroplanes.

Nearly every pilot there came up to chat with us it seemed.

Here is a photo sequence of some of the journey. 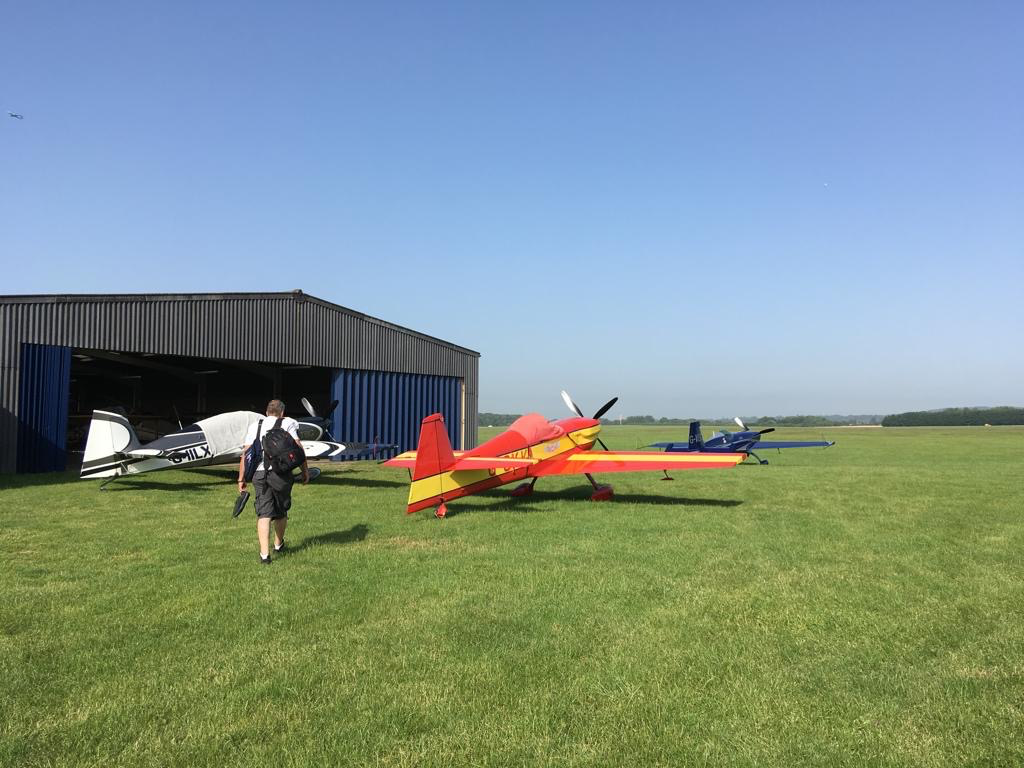 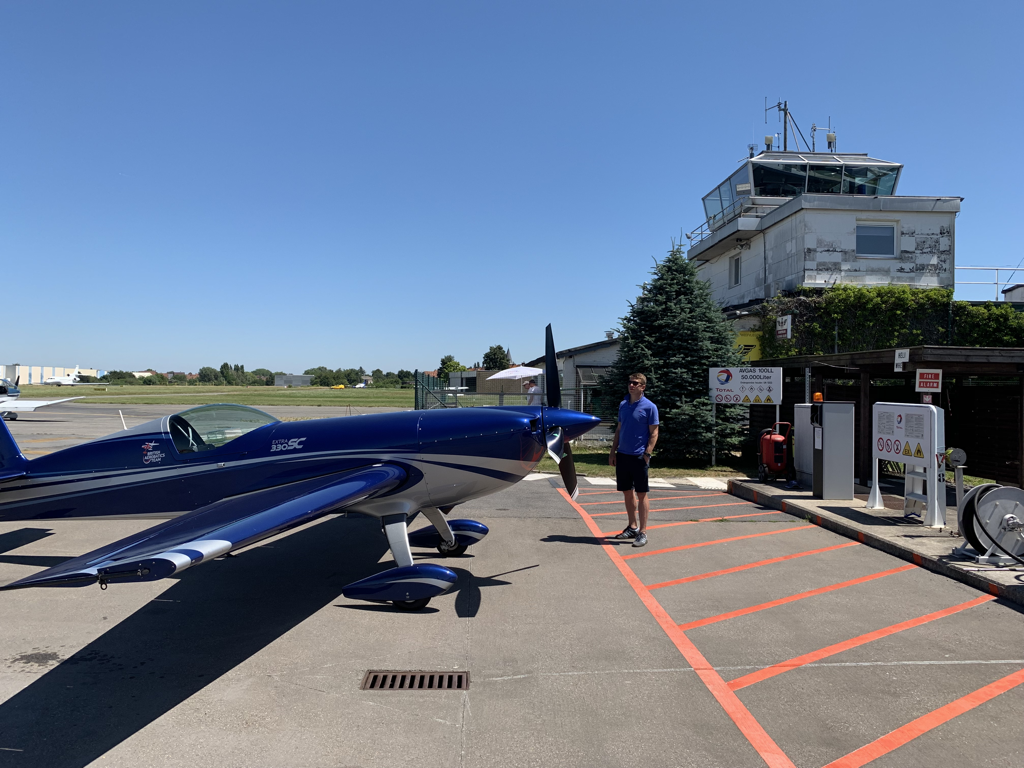 Clearing Customs and refuelling at Kortrijk. 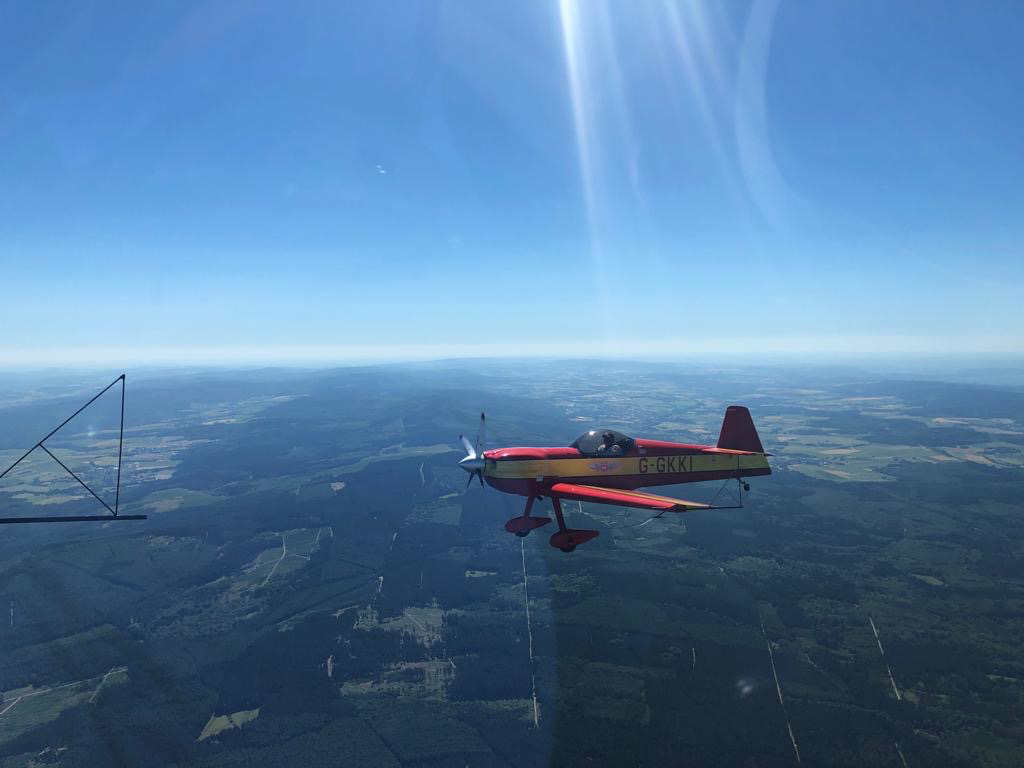 Flying in formation over Germany. 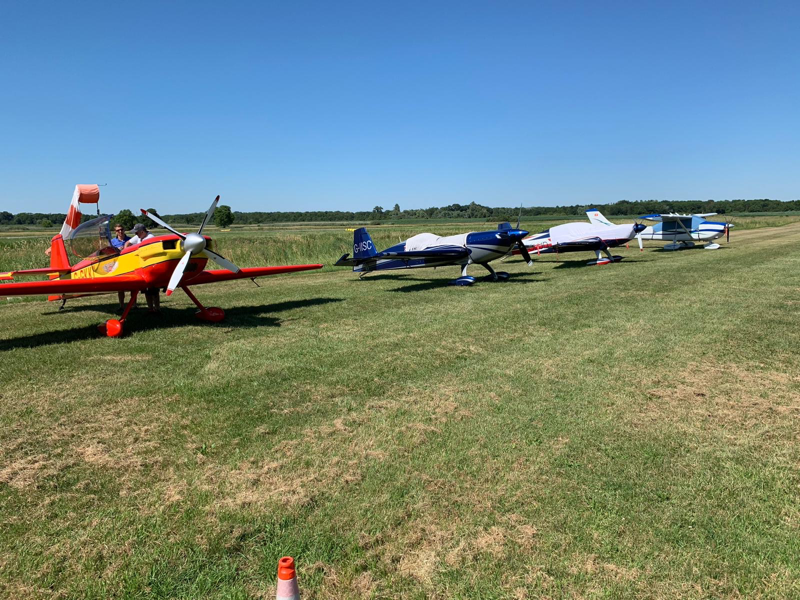 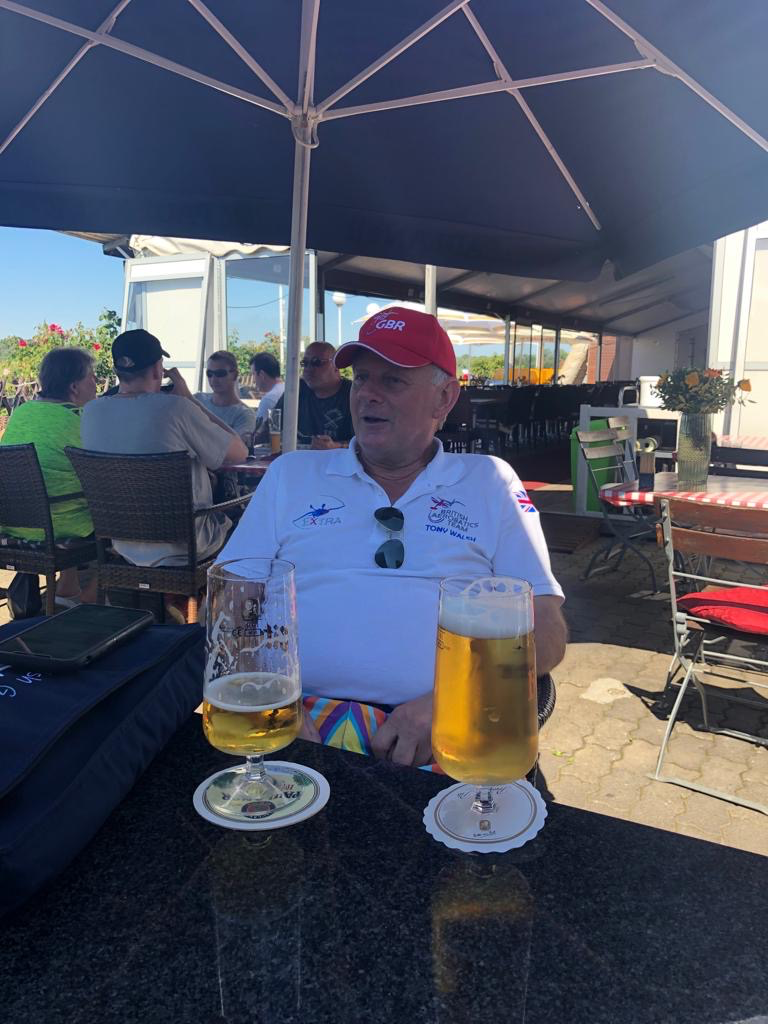 Team Beer to combat the heat 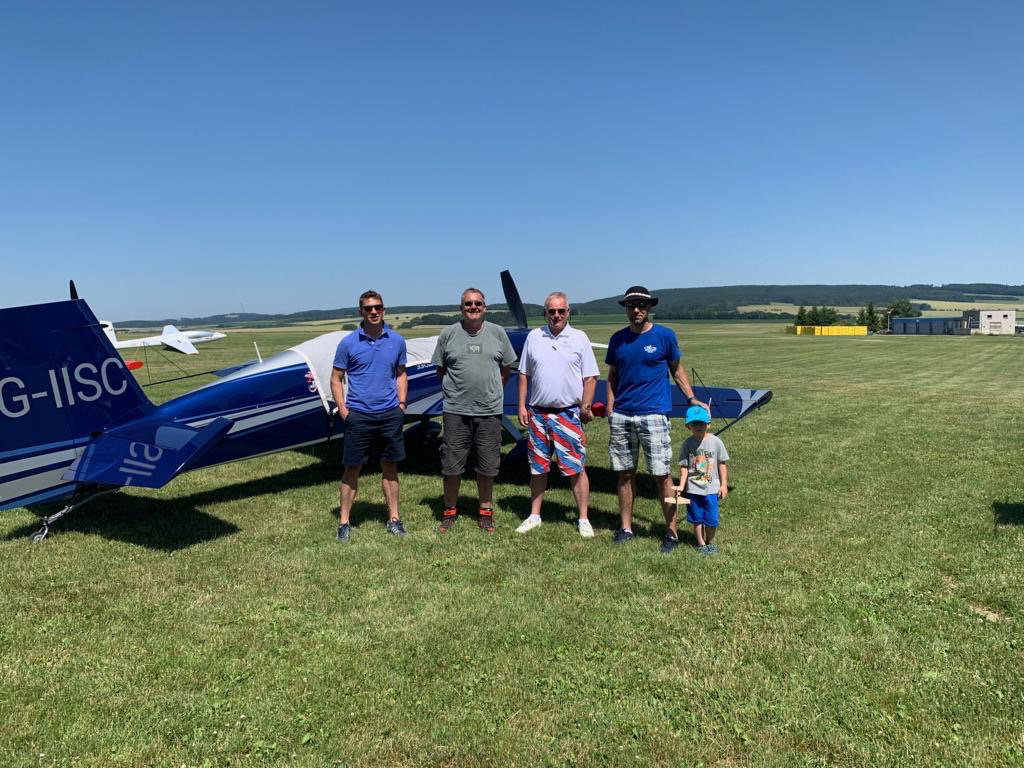 Friendly welcome and met RBAR pilot Martin Sonka (on the right with the little boy) who is training at our training base, in his case for the Unlimited World Championship in August. 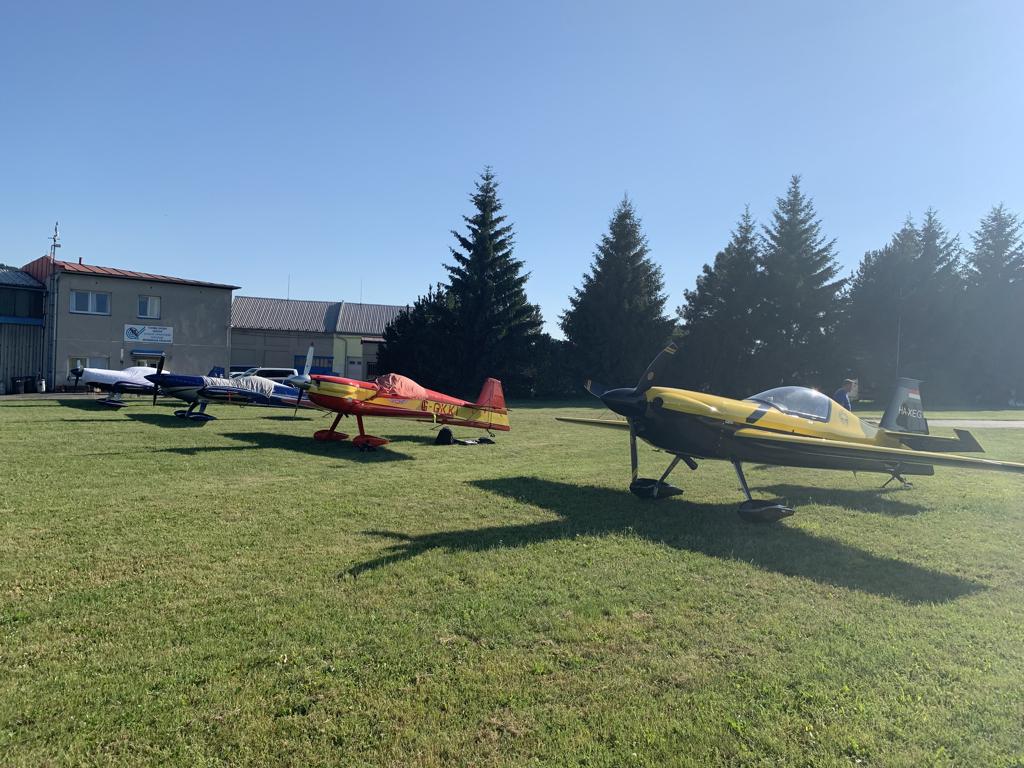 4/6 of the British Team has arrived and here are our planes.
Maxthelion, Dave W, TheKentishFledgling and 6 others liked this

By davef77 -  Mon Jul 01, 2019 4:58 pm
Like 1
Mon Jul 01, 2019 4:58 pm #1703070
Today is the first day of our training camp at our temporary home base of Movsca Trebova. The airfield operators couldn't have been more helpful. They have given us the run of their beautiful airfield and free access to establish an aerobatic box over the field to practice in.

The box position is partially over the runway, but with the main axis at 90 degrees to the line of the runway. This means that the runway is a great marker for positioning as we practice, but is a bit trickier than usual because it is across our path most of the time, rather than alongside.

Competition aerobatics takes place in a marked box. The box is essentially a 1km cube of air in which we strive to display our manoeuvres. One of the big difficulties in competition flying is placing your aerobatics in a place where the judges, sitting on the ground, can clearly see how precise (or otherwise) you flying is.

We planned to fly three flights each today, but thunderstorms intervened in the afternoon and meant that we each got only two flights.

We are starting off easy, flying our "Free Known" sequences. These are sequences that we have known, and have been practicing for some time. At the start of the season the governing body, CIVA, published five figures, and each pilot is allowed to add another 5 figures to create a sequence that best suits them and their aircraft.

The idea is that this gives us a relatively easy start to a competition, because we can fly something that we are familiar with, even if we are flying in an unfamiliar location.

So we started our training camp flying our Free Known sequences a couple of times. We were given an "Unknown Sequence" to learn and fly for our third flight, but because of the weather, I will be learning that this evening rather than at the airfield.

Unknown sequences are the real test. In a competition we are not allowed to practice these sequences, we need to learn them, plan how we will fly them and imagine how we will fly them on the ground. We use a variety of techniques to achieve this, including visualisation often in the form of what is called the "aerobatic dance". If you have ever seen an aerobatic pilot preparing to fly, you may have seen them gyrating around, moving their arms and legs in weird ways and generally looking very far from cool. This is the aerobatic dance, where we try and imagine all of the important things that we must do to place this complex sequence of figures in exactly the right place in front of the judges so that they can see them and so score us effectively.

There are four pilots at this camp. Me (Dave Farley) flying a CAP 231 EX, Adrian Willis flying a new Hungarian machine, the Gen Pro, Trevor Duggan flying an Extra 330SC and Tony Walsh flying an Extra 200.

The other two team members, Graeme Fudge (CAP 232) and Simon Wood (Edge 360) will miss the training base and meet us at the comp venue at Breclav on Friday.
Last edited by davef77 on Mon Jul 01, 2019 5:04 pm, edited 1 time in total.
Maxthelion liked this

I look forward to how this thread develops.

If you get time, and when it fits into your narrative, would you do a few words on how the scoring system works and how the judges mark?
Dave W
Want Going Foreign Info? (v4.51 4/17) ... French RT kneeboard
Class Rating Reval. by Experience PDF (v1.6)...
VFR RT Reference... LAA Permit Renewal Test Card

I look forward to how this thread develops.

If you get time, and when it fits into your narrative, would you do a few words on how the scoring system works and how the judges mark?

This thread makes a refreshing change to the usual topics of discussion.

By akg1486 -  Tue Jul 02, 2019 8:16 am
Like
Tue Jul 02, 2019 8:16 am #1703161
It looks like you've had a pleasant fist experience of flying abroad, in particular meeting friendly people. You weren't exceptionally lucky: that's how it usually is. Very best of luck in the competition, although the whole adventure may be a bigger and better experience than only the actual race (if "race" is the word you use for these things). Enjoy!
Autocorrect is so frustrating. It's always making me say things I didn't Nintendo.

Being so far inland is the wind pretty constant? Positioning will be harder with a x-wind on the A axis!

davef77 wrote:.. England Football team go to a posh hotel with WAGs for training at the big championships,...

HABs these days ? Or perhaps the ladies win more than the men precisely because they don't have their males in tow ?

Wildcat One wrote:Crikey, an entire field of carbon monoplanes at Intermediate! In my day, it wasn't unusal to have a Stampe competing at intermediate (and that was this century)!
.

It's a real bugbear of mine that this has come to pass. The category inflation in the sport now means that many of those competing at intermediate level have traded in Pitts S-1Ss for carbon monoplanes that were previously only required to be competitive at Advanced or Unlimited. At last year's Sports level nationals there was one Pitts S-2, my RV, and the remainder of the field was Extra 200 shaped. Competition aerobatics is never going to be a cheap sport, but the rapidly escalating costs of climbing the ladder beyond the first rung means that many drop out before they have reached their full potential. It would be great if at Sports and Intermediate level there could be a 'K' factor (difficulty factor) applied to the aircraft as well as the figures to level the playing field, as no matter how many times I hear folks say it's all the pilot and not the aircraft, I haven't seen anyone dominate in a Decathlon in my time in the sport.

In the USA they have made an effort to address this by not including flick rolls and inverted spins in the Intermediate reportoire, meaning that more affordable aircraft can still compete at this level.

There are many possible solutions to this, but something really needs to be done. The cause is the ever increasing capability of the top echelon of aerobatic aircraft, which means the increasing standard at the top is causing the inflation in the lower categories. I'm sure that Sports will remain as it is, but the gulf between it and Intermediate has never been wider.

If anyone wants to point out that I should raise this with the British Aerobatics Association - I have already but there doesn't seem to be any interest.
gaznav, Wildcat One, youngman1 and 1 others liked this