But you are missing the point entirely with ADS-B in that it does not require more than ONE receiver to get the data. It is the MLAT within WAM that requires many receivers to detect/position fix Mode S. Further, with the advent of high-gain antenna used on the ADS-B receiver then the detection ranges of a 20W ADS-B transmitter is way in excess of 40nm. Indeed, with the amateur set up OGN receivers then detection of FLARM signals with an output of 0.01W (yes 10 MilliWatts!) is normally in excess of 30nm.

Do you not really believe that the CAA and NATS have not thought about this for Project EVA? Do you not think that CAP1391 has just had a teensy weensy bit more thought behind it? Do you really think that the CAA Airspace Modernisation Strategy has not thought through this? Why do you think that singular ADS-B receivers are being tested at smaller aerodromes?

What I find totally staggering is that for a long time GA was faced with mandatory fitment of Mode S (non ES) for all. That was dropped for the planned 2008 date as the proposed cost of technology was railed against by the GA community - many said they wanted a light weight transponder for all air users to use (especially those that would find it hard/impossible to fit). So then we had the 2012 mandate but only for Class A-C and then Project EVA and the Low-Power ADS-B Transceiver (LPAT). Originally LPAT was supposed to be around £500 and everyone discussed that ad nauseam about 5 years ago. But when it became apparent that LPAT would likely be at least twice the cost of the planned price, then it kind of stopped. But the CAA and NATS still held that dream of LPATs and released CAP1391 - uAvionix spent their own money to develop a device that met the specification and we are now able to get that LPAT at sub-£500. It is the only one of a kind so far.

Then we get a whole bunch of people (almost as bad as Luddites from 200 years ago) telling the CAA and NATS in their best Harry Enfield voices - “Now I don’t believe you want to do it like that...”. Are some of us on here really that naive that they have not been developing this plan over a number of years, with trials and various plans as developments progressed? Or are we just going to continue to “Smash the Spinning Jenny” at every opportunity???

I am quite staggered, to be quite honest...
Jon G4LJW, ls8pilot, AlanC liked this

Throughout this RA, any reference to SSR is equally applicable to Wide Area Multilateration (WAM) and Automatic Dependant Surveillance Broadcast (ADS-B).

These quotes are slightly ambiguously worded, but one interpretation is that ADS-B alone is not sufficient and that you need both ADS-B and WAM to equal/surpass the performance of SSR. I would agree with this: without WAM, ADS-B is too easily spoofed, as we have discussed ad nauseam before, both here on Flyer and privately. For non-critical applications, ADS-B alone may be enough - e.g. to "coast" through a temporary loss of three-way WAM on a previously validated ADS-B transmitter - but ADS-B alone is not enough to validate positional information due to the trivial way in which it can be spoofed.
....

As explained above, ADS-B is not a suitable alternative to SSR, it is ADS-B+WAM which is suitable.

I'm a bit confused by this, it seems we are rather gold plating something when a simpler solution could be of significant benefit. Today you can call up a controller and give your position as (eg) "2nm NorthWest of xxx VRP at 4000ft", this is subject to many errors, both deliberate and accidental and at best only gives a vague idea of where you actually are. Your real position can only be confirmed by primary radar identifying you out of all the other traffic in that area (and good luck with that on the edge of the Brize Zone on a busy day

). Would not a simple, single source, ADSB receiver allow an accurate (at least to within 10-20 metres ) confirmation of position with much reduced radio chat or controller effort?

I can sort of understand why you want 3D confirmation if ADSB is to replace transponders for heavy/fast moving IFR, but surely as an aid to GA VFR transit of Class D (or ATZ etc), or simply awareness of traffic close to a zone boundary then single source is major step forward from where we are today?
gaznav liked this

tomshep wrote:Yes but the best is the enemy of the good so the long promised £600 solution is no longer good enough.

That is simply not true. LPATs (CAP 1391 devices) are perfectly able to generate an ADS-B emission capable of being MLAT'd in some applications or used as a stand-alone target in combination with an integrity value, in others.
gaznav liked this
Cub

For example, I'd buy one, since my Mode S won't convert to -ES without an expense in excess of that for a SkyEcho2. The same is likely true for many funke TRT800H (early models) and Garmin 328 owners at least, I suspect.

The initial trial was released after Christmas I believe? Here it is:

My understanding is that there was one transponder that caused issues. It is believed to be a Mode S transponder that has Extended Squitter (ES) but not GPS enabled with it. That caused issues and because there were only a few others in the trial then the CAA/NATS wanted to see a bit more. So another trial is ongoing - I’m not sure if it has finished yet or not. I would have participated myself (I was invited) but none of the aircraft I fly have transponders.

1090MHz Channel loading
It is expected that voluntary carriage of ADS-B by GA will increase as GA users see the direct safety benefits it provides, hence the CAA’s and NATS’ ambition to promote the use widespread use of ADS-B on 1090 MHz, including operators of aircraft that already have a transponder.

This section is reproduced from the NERL concept for GA surveillance because it examines the consequences for the radio frequency (RF) spectrum if a large number of ADS-B transmitters are introduced into the operating environment.

One of the two radio frequencies used for secondary surveillance, 1090MHz, is already known to suffer from high levels of occupancy caused by responses to Mode S radar and Traffic Alert and Collision Avoidance System (TCAS) interrogations (on 1030MHz). ADS-B uses the same reply frequency and there has been a concern that a significant increase in the number of devices using 1090MHz may reduce the probability that ground radars will detect:

› A single response to a selective interrogation, which may cause further interrogations. The update of the track may be delayed while an additional interrogation is made and the possibility of False Replies Unsynchronised in Time (FRUIT) is increased. FRUIT is a term used to describe the situation when the transponder response is received by a radar that did not make the initial interrogation, and,

› Responses to a Roll Call, because failure to register responses to the roll call may delay the initiation of a radar track.

QinetiQ were contracted to simulate the impact on Roll Call Round Trip Probability (RTP) and Probability of Detection (PD), which will be experienced by existing radars when the RF environment changes. Their model simulated the effects of introducing 828 Low Power ADS-B Transceivers (LPATs) prototypes into the operating environment at any one time. The full results are published in references 1 and 2.

The conclusions of these reports indicate that, provided the transmitted power of LPAT was limited to a maximum of 20W, there is likely to be:

1) A measurable increase (46.3Hz to 58.0Hz) in the rate of long format Mode S FRUIT. However, this is a small percentage (~1%) of the total FRUIT in the scenario, which remains stable.

2) A slight drop (0.42ppts to 0.52ppts) in RTP for all Interrogators of Interest (IoI). However, reference 2 shows there is likely to be a significant decrease in RTP if the effective transmitted power is increased to 45W for each ADS-B device.

In summary, the widespread use of LPAT type systems by the GA fleet does not significantly compromise the performance of ground radar interrogators, provided the maximum transmitted power is limited to less than 40W when measured at the antenna. This finding is reflected maximum transmitted power requirement in the CAP1391 (reference 2) standard published by the CAA in 2016 which permits the maximum as 40W at the antenna port.

It should be noted that the modelled GA aircraft in the simulations could alternatively all equip with low power Mode S transponders (Class 2) which have a minimum peak power output of 18.5 dBW (70W) at the antenna port, see reference 3. Furthermore, these Class 2 Mode S transponders would also be ADS-B OUT capable, likely providing the same message rates as modelled above, and additionally producing replies to ground and airborne TCAS interrogations as well as contributing to the occupancy of 1030MHz.

It can therefore be reasoned that although not explicitly modelled, equipping GA aircraft that currently have no secondary surveillance capability with Mode S transponders, instead of ADS-B only transmitters, would detrimentally impact the 1090MHz spectrum occupancy. Hence the portable ADS-B transceivers would seem to be the preferred option if the majority of GA aircraft were to adopt cooperative surveillance.

So I read this as we do not want everyone to equip with Mode S transponders with our without ADS-B. We want everyone to use LPATs instead where needed. As you say, Dave, all we need is the Authority to authorise it. Further it would seem that a SkyEcho device could be allowed to increase its output to up to 40W (double of what it does at present) without affecting the spectrum and improving EC detection ranges.

When will the trial and results be used to make a decision as to whether a Mode S transponder plus CAP1391 can/cannot emit simultaneously?

If the decision is that they can, then that will be my final prompt to replace my existing PAW with the ADS-B OUT capabilities of a CAP1391 device.
gaznav liked this
Dave W
Want Going Foreign Info? (v4.51 4/17) ... French RT kneeboard
Class Rating Reval. by Experience PDF (v1.6)...
VFR RT Reference... LAA Permit Renewal Test Card

tomshep wrote:Cub, I agree with you. Sky Echo IS the £600 transponder solution although it is even cheaper (and in many ways better) but the CAA seem not to be willing to grant the system transponder equivalence

AND THEY BLOODY WELL SHOULD!

Unfortunately, standalone ADS-B won't currently deliver interoperability with TCAS and that is why they 'state' preferred solution is a Mode S transponder with ADS-B Out enabled.
T67M liked this
Cub

By gaznav -  Sat Jun 08, 2019 11:43 pm
Like
Sat Jun 08, 2019 11:43 pm #1698918
I understand that SIL=1 portable ADS-B will show on Cockpit Display Traffic Information (CDTI) and Airborne Traffic Situational Awareness (ATSAW) displays that are becoming more and more common due to the FAA and EASA ADS-B mandates for ADS-B. So not TCAS but certainly an overlay of situational awareness tracks in the glass cockpit. 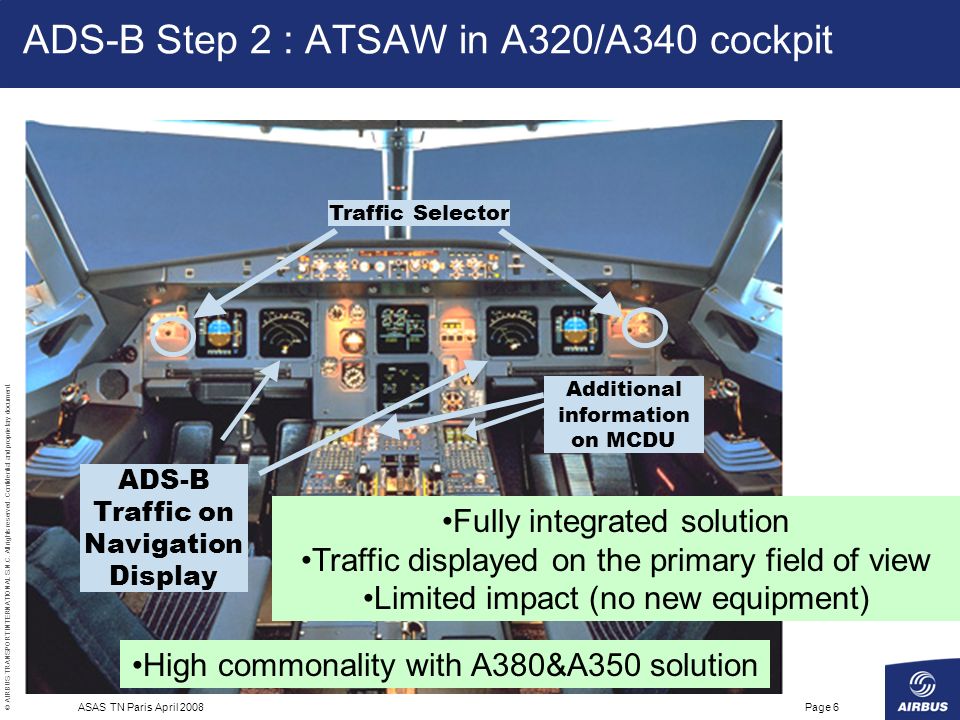