What a beautiful day...

As some of you on here know, I have been thwarted for a while in my hunt for a suitable aircraft. Purchasing an aircraft is probably something you can get better at if you do it more often, but it'll certainly never be quite as straightforward as buying a car...

However, after a couple of hiccups and delays, and after missing out on the best flying summer in recent history, I was a very happy chappie today at White Waltham when the current owner flew her in and handed over the keys. 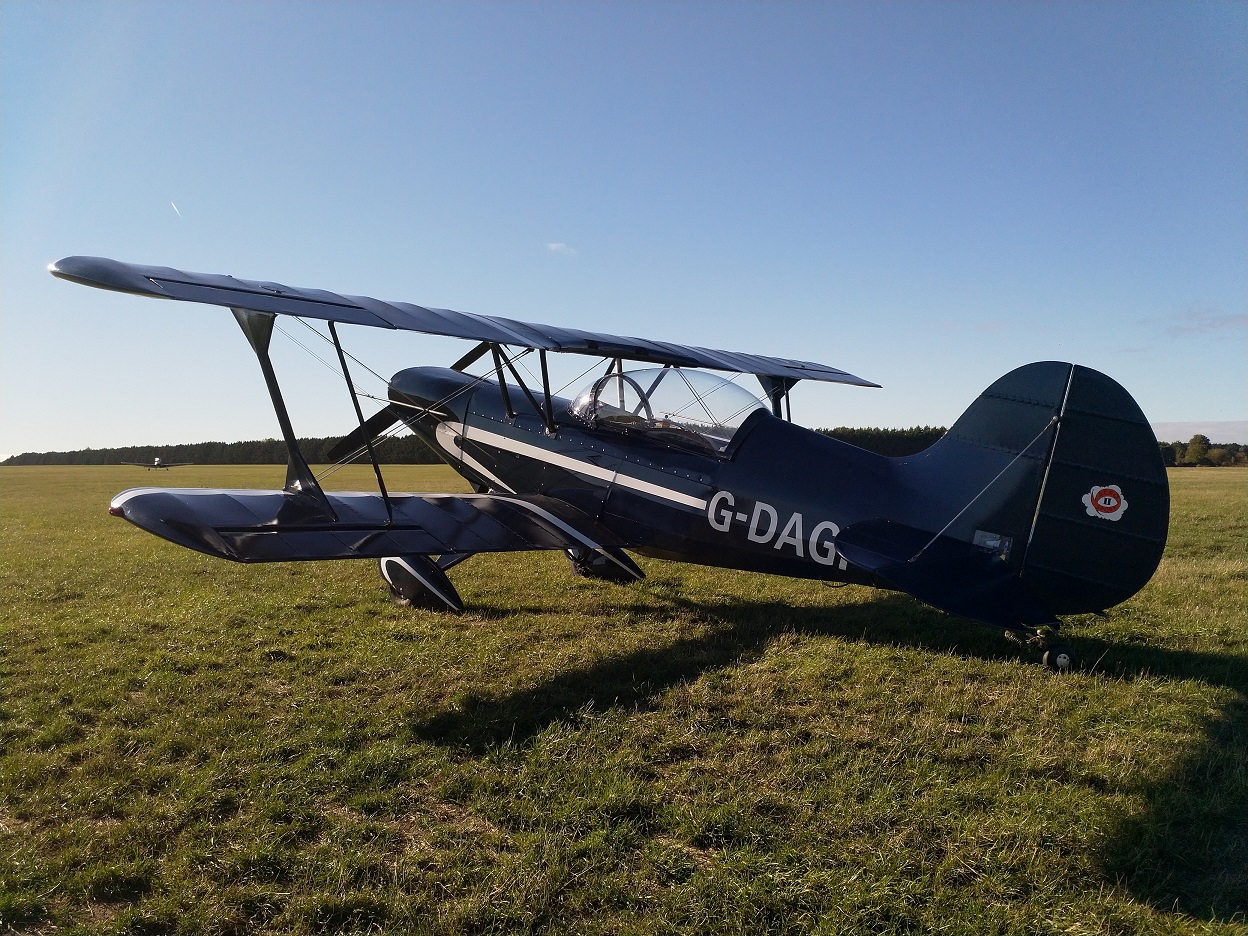 And I am proud to say that she is now mine.
All mine!

I'm looking forward to getting the prerequisite conversion to type and, in the longer run, see if I really like aerobatics or just want to dabble.
Having said that, I also intend to do some 'transiting' in her so we will be touring more than before - easier when no longer renting.

Thanks to David for building and selling a great little aircraft and to Julian so far for helping me to get intimate with her.

nallen, ChampChump, Flying badger  and 20 others liked this
We all live under the same sky, but we don't all have the same horizon.

p.s. are you going to keep it at WW? (loaded question)

Second happiest when you sell it ...!

Rob L wrote: p.s. are you going to keep it at WW? (loaded question)

I would love to. I did my initial tailwheel conversion there some years ago and really liked it. It has much more of a pleasant club atmosphere than I have found in the other airfields surrounding London.
But it really is too far away for me - on an absolutely no traffic day it will take me a good hour, in reality it could be anywhere up to 2-3 hours. Yesterday it took me about 1h35.

So it will stay there for now whilst I reach competent level on the type, when I'll move it closer to me. I'm on a couple of hangar waiting lists so that may take some time - all part of the fun of buying an aircraft

Regardless, I will be coming back to fly with Julian so I've joined the club until next April to see how it goes.

I have flown one and found it really quite good fun. I really hope that you get on well with it.

Sandman wrote:Was this plane at Nottingham Airport last weekend? As I saw a similar a/c in this colour taking off.

Not according to the logbook. In fact, it has, rather sadly, not flown anywhere as much as it should have. The engine has 10 hours on it and is still being run in and the airframe has about 60 hours.
I will be changing that

Last edited by Morten on Thu Sep 27, 2018 11:21 am, edited 1 time in total.
Lockhaven, Sandman liked this
We all live under the same sky, but we don't all have the same horizon.

pullup wrote:Happiest day of your life when you buy an aircraft.

Second happiest when you sell it ...!

Not sure I agree with that statement.

After not flying for a while, I recently sold mine in a fit of pique.

Was gutted when it went.

I always fancied an Acrosport 2 its got that great vintage design look, unfortunately Mrs LH would struggle getting in and out one hence we still have our trusty Lock Haven design, which I am not complaining about.
Levis Sed Non Parvus

Nice looking aeroplane, you cant have any soul if you dont love a biplane

I haven’t flown an Acrosport, but flew, and campaigned, my Steen Skybolt (a kind of second cousin once removed) for a couple of years. It was a lot of fun and turned heads everywhere that I took it.

Hope to see you at an aerobatic competition soon

I also hope to see it at Waltham before you pick up sticks.

/Peter
Morten liked this
Autocorrect is so frustrating. It's always making me say things I didn't Nintendo.

Lockhaven wrote:unfortunately Mrs LH would struggle getting in and out

Iceman wrote:Is that a 2-seat aircraft, i.e., is there room for the Mrs

Yup. 2 holes, soloed from the rear. So Ms. M could come along but is unlikely to do so. She'd find it easier to get in and out than the contortions I need to go through to fit my lanky frame into the seat. (And would look better while she did it

In fact, it was one of the things that took me a while to realise - I was originally looking for something which could do it all, gentleman's aeros, touring in comfort at reasonable speed but still returning decent fuel consumption, could get into most strips ... and we could both enjoy. Whereas I could be attracted to building an RV, I'm not that keen on paying for a built one, so my options were limited.

Accepting that this was my toy and my toy alone and that Ms. M might never come with me - and if I wanted to tour and actually go faraway places I'd go back and rent a suitable aircraft - meant I could focus on the fun part instead; hence the Acrosport.

So this is for me only ... and I'm not really losing any sleep over that.

Glad she's getting the thumbs up from those who have flown the type. It is still clearly a compromise but we all have to start somewhere.

davef77 wrote:I also hope to see it at Waltham before you pick up sticks.

I am honoured by being hangared in the same hangar as some mighty fine Pitts and Cap aircraft. My drool marks should have dried up by now

davef77 wrote:Hope to see you at an aerobatic competition soon

Lockhaven liked this
We all live under the same sky, but we don't all have the same horizon.

Morten wrote:I am honoured by being hangared in the same hangar as some mighty fine Pitts and Cap aircraft. My drool marks should have dried up by now

Ahhh, so you are in the same hangar as me, mine is the red CAP, currently with wonky U/C

davef77 wrote:Hope to see you at an aerobatic competition soon

Well, you never know, I put off competition flying for far too long, but it was the best thing I ever did for my flying. If you want any encouragement or advice just let me know.

Welcome to the hangar