Years ago, I used to fly into Dublin airport itself with handling by Park Aviation. In more recent times, I have flown into Weston. Weston however seems to have lost even the basic IAP that it once had.

I’d be interested in any recent experiences heading to either. Costs, contacts etc.

I’ve contacted Universal, the apparent handling agent at DUB, but so far no answer.
BoeingBoy liked this
Guernsey Based Piper Lance - N101DW

GrahamB wrote:According to a Sep 20 SkyDemon pilot report, it was 653€ for a PA32 back then, but the poster didn’t give the length of stay.

I had imagined something along those lines - and no AVGAS available either. May be a question of keeping my fingers crossed for reasonable weather!
GrahamB liked this
Guernsey Based Piper Lance - N101DW

FLYER Club Member
Like 1
Sun Jan 23, 2022 11:08 am #1895125
Universal do eventually respond to emails but sometimes require a second one. Yes it is very expensive indeed for GA and of course you’ll have a fuelling issue. Security is also a nightmare at times even with handling.

Weston seems to have been hit particularly hard by all the Covid fallout which is a shame as it was a good alternative provided the cloud wasn’t on the deck and was so much easier to use.
2Donkeys liked this
Imagine what you might try if you thought you could not fail...

Good place to avoid if you can. But Weston are pretty useless if you actually need to go somewhere.
2Donkeys liked this
I intend to live forever.... so far, so good.

2Donkeys wrote:Weston however seems to have lost even the basic IAP that it once had.

Do you still have the plates?

FLYER Club Member
Like
Sun Jan 23, 2022 4:35 pm #1895168
They are still online @Paul_Sengupta. They just aren't valid any more and Dublin Approach gets a bit funny about clearing aircraft for non-approaches

(Should note also that the VOR on which the approaches were based, has now gone...)
Guernsey Based Piper Lance - N101DW

2Donkeys wrote:(Should note also that the VOR on which the approaches were based, has now gone...)

That's a bit trickier then. Have to load in an old GPS database...

FLYER Club Member
Like 1
Sun Jan 23, 2022 8:26 pm #1895226
Hi Nigel, I have been over and back to Ireland regularly the last few months, mainly Donegal, but have also been into Weston three times, twice in the C340 and once in the Arrow.
The expense of DUB itself made Weston my first choice with DUB the alternate in case the cloud base dropped below the 1500 feet you need for the VFR routing from the Pigeon house chimneys at the entrance to the River Liffey route through the city.
I came across on a Y flight plan (IFR to VFR) with the switch planned around the Killiney NDB KLY which sets you up for the VFR route to EIWT. However, in each case as I descended down from FL160 as soon as I broke cloud and could make out the chimneys they allowed me direct to there, for an enjoyable low level flight down the Liffey to the Palmerston Roundabout, where DUB tower hands you over to Weston to slot into circuit or more likely clear you for a final to RW25.
Weston has now changed hands back to people who want to make it an airport again! Last Sept, you could only fly in on certain days, when they were not filming on the film sets built in the hangars, which is no way to run an airport!
Happily under new management my flight since was far more straight forward. The Ops manager Alan and his staff are incredibly helpful and welcoming. Prices (ex VAT) were 100 euros landing for the C340, with 88 euro handling and a pax charge of 10 euros for security. It was 75 euros overnight parking thus still much cheaper that DUB.
Outbound was back down the Liffey corridor at 1500 feet and then a direct to my IFR point at ENDEQ for the Q36 back towards WAL and home.
I stayed both at the old quaint Lucan Spa Hotel which is walking distance from airport for me or short taxi for most and thence 3 euro on the bus into Dublin! Also stayed in the centre of the city at the Trinity Townhouse Hotel, which was superb! Hopefully no need for Covid passports or Pax Locator Forms anymore, but Irish GARs are required 24 hours in advance as we are outside of Europe! UK GARs easy online.
Hope that helps
Cheers
AF

Nb, the Irish AIP doesn’t lis5 the WST VOR, indicating it is no longer working. However SkyDemon is showing VOR WST as still being there. I’ll email them to advise them o& the error.

FLYER Club Member
Like 1
Sun Jan 23, 2022 9:09 pm #1895233
Here's the Pigeon House Chimneys with the Liffey to follow through Dublin. Regarding the WST VOR, it is still very much there at the airport, but needs switching on again and integrating back into the system for IFR, something I believe the new management at Weston intend to do in the future. 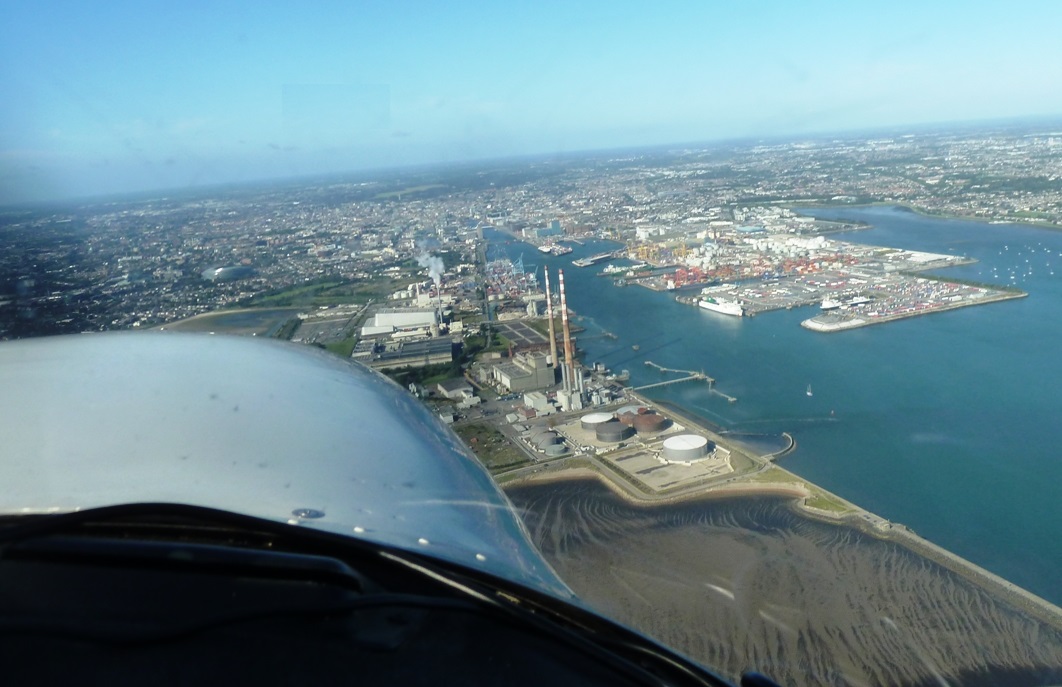 FLYER Club Member
Like
Mon Jan 24, 2022 3:17 pm #1895358
@2Donkeys If it is a quiet day, don't be surprised if the controller offers you a guided tour of Dublin City - eg " on your right you will see the Pidgeon House Chimneys and then on the right will be the Customs House. Next will be O'Connel Street and the GPO"

terrybarr wrote:Mention of the GPO in Dublin in a flying forum reminds me that Neville Shute was a teenager in Dublin at the time of the Easter rising. It's a long time since I read his account if it but I think that his father might have been Postmaster general in Ireland at the time.

"Shute's father, Arthur Hamilton Norway, became head of the Post Office in Ireland before the First World War and was based at the General Post Office, Dublin in 1916 at the time of the Easter Rising. Shute himself was later commended for his role as a stretcher-bearer during the rising"
(mere guide at) Jet Age Museum, Gloucestershire Airport
http://www.jetagemuseum.org/
TripAdvisor Excellence Award 2015
http://www.tripadvisor.co.uk/Attraction ... gland.html